Official news versus gossips in the far South 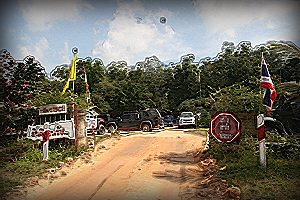 Unlike their compatriots in the other parts of the country who have been spoon-fed with just official news about the situation in the restive far South, the people in the region also have had access to gossips about the events in the region.  On various occasions, some key information in the official news and in the gossips differ so much that the locals are confused and wonder which of the two sources of information is more credible and reliable.

The followings are some of the examples of the discrepancies of information from the official news and the unofficial news or the gossips:

1. The number of guns stolen by insurgents in the raid of an army outpost in Ra-nage district of Narathiwat on January 19.  Colonel Banpot Poonpien, spokesman of the Forward Internal Security Operations Command of the Forth Army Region, insisted that only about 20 guns were stolen.  However, the talks which went around troops in the field suggested that more than 50 guns were stolen, including at least one M60 light machinegun and Belgian-made Minimi light machinegun which was freshly acquired by the army.

It should be noted that about seven years ago on January 4, 2004, insurgents attacked an armoury of the 4th development battalion at Prince Narathiwat Ratchanakarin camp in Cho-airong district of Narathiwat and made off with a large cache of war weapons.  The army has never disclosed officially exactly how many guns were stolen but just gave a rough figure that the number was between 50-60.  The exact figure of the stolen arms was eventually disclosed by the Department of Special Investigation which took charge of investigating the case.  Altogether 413 guns, including many M16 assault rifles, were made off from the camp by the insurgents.

2. The issue whether there were spies inside the army outpost which was raided by insurgents on January 19.  Forward ISOC of the Fourth Army Region insisted that there were no spies in the camp and that the report about spies was spread by suspected insurgents to sow the seed of mistrust between Buddhist soldiers and Muslim soldiers.   Colonel Banpot also insisted that the camp was not blacked out during the raid but troops in the camp had been instructed to dim the light for safety reason.

“I was preparing some documents with the captain inside the office.  Suddenly, the light from the fluorescent lamp went off and the office was peppered with gunshots from different directions,” said one of the surviving soldiers.

Several veteran troopers who have gone through real battles had the insurgents not been aided by information given them by some spies inside the camp they must have been very good indeed because even with power blackout they were able to direct their gunfires at the defending soldiers without hurting any of their own men who stormed the camp from different directions.  Also the insurgents appeared to know where weapons were stored in the camp.

3. The question about the actual of troops inside the camp when it came under attack.  ISOC only said that the camp had altogether 88 troops and, on that particular, some of the troops had taken leave.

Information from police investigators suggested that the camp might be guarded by just 30 troopers at the time of the raid.  These included 19 surviving soldiers placed under rehabilitation programme, four who were killed and six injured.

This suggested that the number of officers allowed to take leave might exceed the 25 percent limit set by the army.

4. The location of the camp in question.  The camp of the 15121st infantry company is located near the so-called contraband smuggling route which connects Su-ngai Kolok, Waeng and Sukhiri districts of Narathiwat.  On the other side of the camp, there is another network of roads connecting Sai Buri district of Pattani, Ba Cho and Yee-ngor districts of Narathiwat.  This network of roads has been known as a route frequently used by suspected insurgents to move their explosives devices.

It was reported that the camp commander, Cpt Krit Kampeerayan who was killed during the raid had carried out more than 20 search operations in areas around the camp in the past few months and succeeded in arresting several suspected smugglers.

However, despite the full knowledge that the road network was frequently used by contraband smugglers, there has never been a serious crackdown on the illegal activities by the security forces.

5. The bombing incident front of the central masjid in Yala on June 8, 2010 in which 23 people were injured.  Eyewitnesses claimed that an army truck passed through the mosque shortly before the bomb exploded and it was widely suspected that the explosion came from a bomb which accidentally fell out of the truck and went off.  But the ISOC insisted that no army truck passed through the mosque that day.  It was only after someone presented a clip from a close-circuit TV camera which showed a military truck passing through the mosque before the explosion that ISOC admitted the fact about the truck but denied it was responsible for the bomb explosion.

The above-mentioned cases clearly showed that, on various occasions, truths were evasive as authorities concerned were not honest enough to tell the truths to the people for whatever the reasons.

Former prime minister Anand Panyarachun in his capacity as chairman of the independent National Reconciliation Committee once said that the unrest problem in the far South would be eased – if not solved- only when truths were told and recognized.